If you’re stuck at home like hundreds of thousands of others around the world, why not catch up on your reading? To help you out, we’ve put together a list of great e-books that are all about our region. 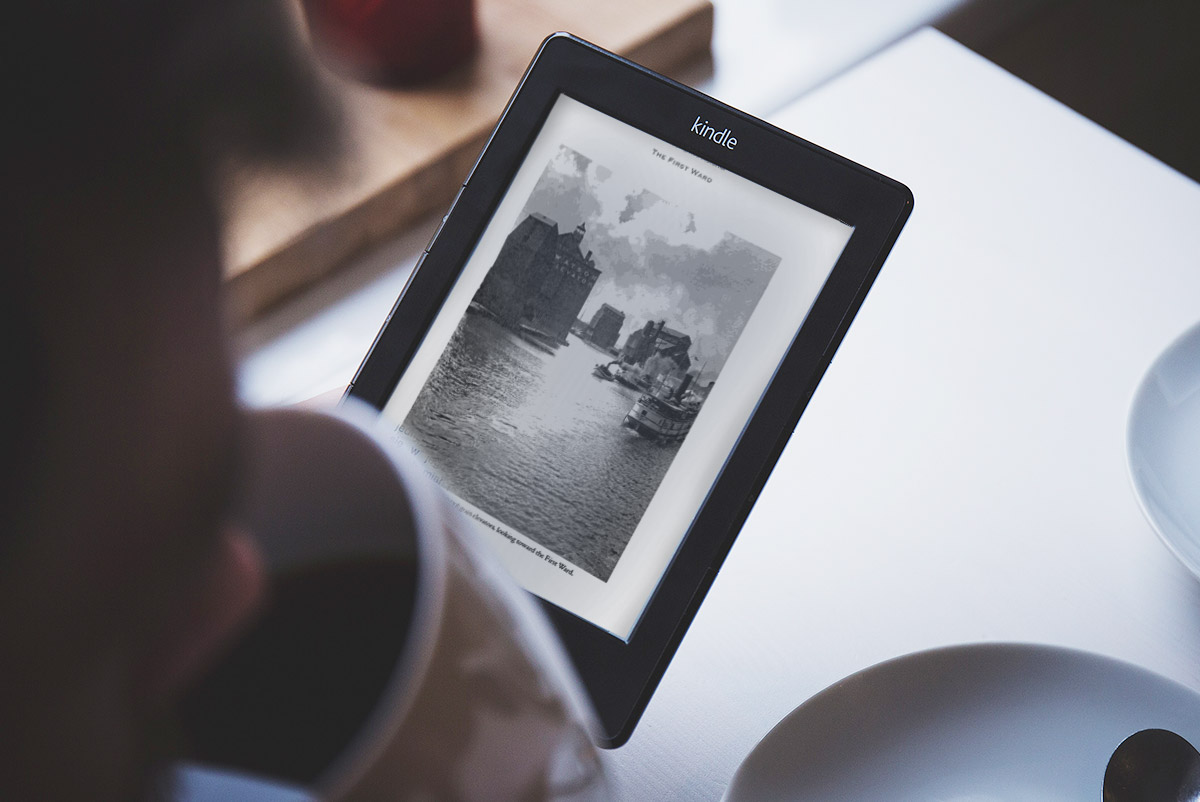 Stuck at home? Catch up on your reading by downloading one of the Buffalo Niagara e-books below

We may be in the midst of an emergency in Erie County, but all things considered, it’s a major benefit of the digital age that hundreds of thousands of people are able to work from home. Another benefit in a situation like this is having access to tons of entertainment when you’re cooped up for an indefinite period of time; one form of which is e-books. The best part, of course, is that you can read an e-book from home without ever having to pick up a physical copy. With this end in mind, we’ve put together a list of great e-books that are all about our great, historically important region. You’ll find true crime, food, sports trivia, and detailed historical accounts of how Buffalo Niagara got to where it is today. It’s a varied but by no means comprehensive list in no particular order.

Click any link to go that book’s Google search page; from there you can pick the e-book format of your choice, whether that’s Kindle, Google Play Books, Kobo, and more. 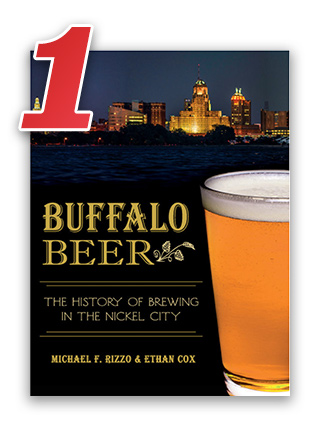 Buffalo Beer: The History of Brewing in the Nickel City

From Amazon.com: “Buffalo’s appreciation for a frosty pint stretches back more than a century before anyone enjoyed a cold one with a basket of wings. By the middle of the 1800s, the industrial hub counted malt and beer among its most vital and satisfying products. Operations like Simon Pure Beer, Iroquois Beverage and the Magnus Beck Brewing Company brought Buffalo’s world-class ales to the rest of the country. Prohibition saw a thriving business in black market hooch, though it all but killed the city’s historic breweries. A few survivors struggled to recover. Today, a new batch of breweries like Community Beer Works and Big Ditch Brewing Company are crafting a beer revolution in the Queen City. Historian Michael Rizzo and brewer Ethan Cox explore the sudsy story of Buffalo beer.” 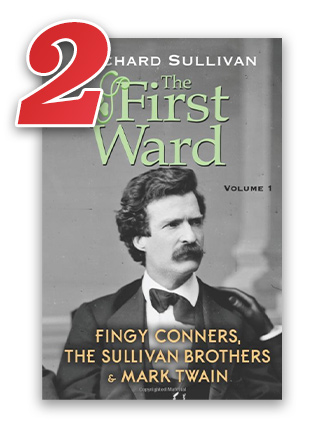 From Amazon.com: “Fingy Conners was a self-made multi-millionaire…and a serial murder. Get ready to be astonished at what this now-forgotten actual historical figure was not only capable of—but got away with. If Fingy Conners had sprung from some writer’s fanciful imaginings, such a character would be dismissed as outlandish and improbable, so thoroughly and so swiftly did this man accrue wealth, political power and cruel domination over so many … At the opposite end of the spectrum from Fingy Conners lies the great Samuel Clemens, aka Mark Twain. Whilst co-owner of the Buffalo Express newspaper, Clemens takes teenage Jim Sullivan under his wing, sensing the deep wounding having been suffered by the youth. Sam instills hope and purpose at the cusp of Jim’s manhood where little previously existed, even as Clemens himself continues to suffer great distress and deep personal loss … All of the personalties in The First Ward novel series are real. They lived and breathed and walked the streets. The core characters are the author’s own ancestors.” 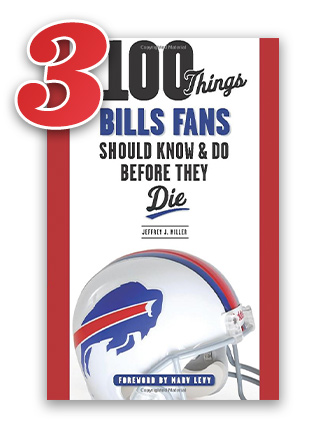 100 Things Bills Fans Should Know & Do Before They Die

From Amazon.com: “Filled with details on the rich history of the Buffalo Bills, this lively, detailed book explores the most critical moments and important facts about past and present players, coaches, and teams that are part of the storied history that is Bills football. This guide to all things Buffalo Bills covers the franchise’s historic four consecutive AFC championships, the origins of the famous Billy Buffalo mascot, and the best place to grab a meal or drink before or after a game. Scattered throughout the pages are pep talks, records, and Bills lore, ensuring that readers are certain in their knowledge of the most important facts about the team, the traditions, and what being a Bills fan is all about.” 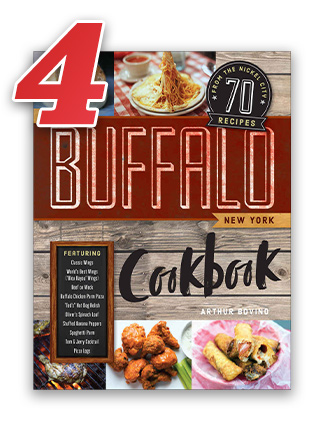 The Buffalo New York Cookbook: 70 Recipes from The Nickel City

From Amazon.com: “As a culinary capital, Buffalo is an unsung American hero. Home of the iconic Buffalo wing, of course, it’s also a city of sandwiches, pizza, hot dogs, and spag parm. It’s where creativity meets simple food to produce iconic eats copied endlessly, from fish fries to beef on weck, to sponge candy and more. With this entertaining cookbook, the companion to Buffalo Everything: A Guide to Eating in “The Nickel City,” Arthur Bovino shows home cooks how to bring the best of Upstate New York into their kitchens. Whether you’re hosting a get- together to watch the game or in need of some weeknight comfort food, The Buffalo New York Cookbook has you covered. 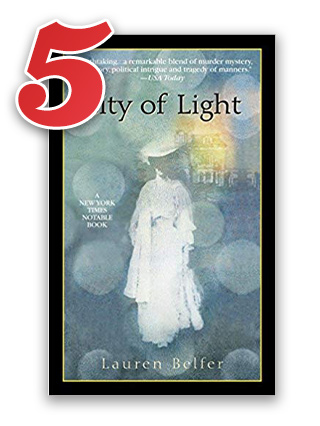 From Google Play: “The year is 1901. Buffalo, New York, is poised for glory. With its booming industry and newly electrified streets, Buffalo is a model for the century just beginning.

Louisa Barrett has made this dazzling city her home. Headmistress of Buffalo’s most prestigious school, Louisa is at ease in a world of men, protected by the titans of her city. But nothing prepares her for a startling discovery: evidence of a murder tied to the city’s cathedral-like power plant at nearby Niagara Falls. This shocking crime–followed by another mysterious death–will ignite an explosive chain of events. For in this city of seething intrigue and dazzling progress, a battle rages among politicians, power brokers, and industrialists for control of Niagara. And one extraordinary woman in their midst must protect a dark secret that implicates them all…” 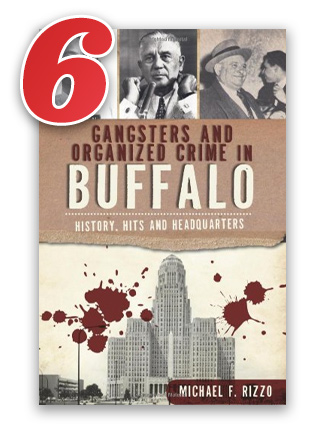 Gangsters and Organized Crime in Buffalo: History, Hits and Headquarters

From Amazon.com: “Stories abound about legendary New York City gangsters like “Lucky” Luciano, but Buffalo has housed its fair share of thugs and mobsters too. While many were nothing more than common criminals or bank robbers, a powerful crime family headed by local boss Stefano Magaddino emerged in the 1920s. Close to Canada, Niagara Falls and Buffalo were perfect avenues through which to transport booze, and Magaddino and his Mafiosi maintained a stranglehold on the city until his death in 1974. Local mob expert Michael Rizzo takes a tour of Buffalo’s mafia exploits everything from these brutal gangsters’ favorite hangouts to secret underground tunnels to murder.” 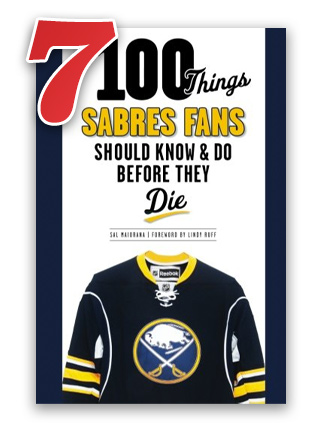 100 Things Sabres Fans Should Know & Do Before They Die

From Amazon.com: “Covering the entire 30 year history of the Sabres, author Sal Maiorana has collected every essential piece of Sabres knowledge and trivia, as well as must-do activities, and ranks them all from 1 to 100. Most Sabres fans have taken in a game or two at the First Niagara Center, have seen highlights of a young Pat Lafontaine, and are aware that the Blizzard of 1977 caused the team’s first weather-related cancelation. But only real fans know who scored the first goal in franchise history, can name every member of the Sabres Hall of Fame, or can tell you the best place to grab a bite in Buffalo before the game. 100 Things Sabres Fans Should Know & Do Before They Die is the definitive resource guide for both seasoned and new fans of the Buffalo Sabres.” 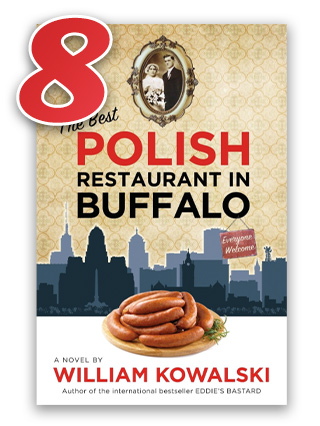 The Best Polish Restaurant in Buffalo

From Amazon.com: “In 1908, 16-year-old Aniela leaves her native Poland for Buffalo, New York. Over the next century, her descendants take root, struggle, and thrive, with the family restaurant at the center of it all, doing their part to weave their threads into the rich tapestry that is the history of immigration in America … A masterful blend of historical and modern fiction by a best-selling, award-winning author, THE BEST POLISH RESTAURANT IN BUFFALO chronicles a century of life in America for one humble Polish farm girl and three generations of her descendants in Buffalo, New York.” 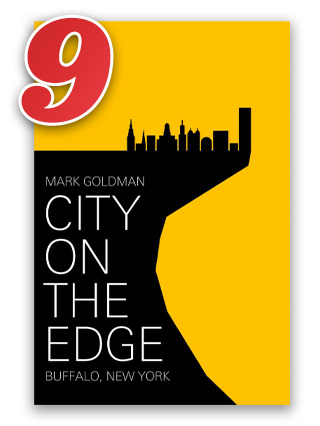 From Amazon.com: “BUFFALO, NEW YORK IS ENJOYING A RESURGENCE, AND HAS BECOME A RECOMMENDED TRAVEL DESTINATION. THIS BOOK TELLS THE STORY OF HOW IT GOT HERE. In a sweeping narrative that speaks to the serious student of urban studies as well as the general reader, Mark Goldman tells the story of twentieth-century Buffalo, New York. Goldman covers all of the major developments: · The rise and decline of the city’s downtown and ethnic neighborhoods · The impact of racial change and suburbanization· The role and function of the arts in the life of the community· Urban politics, urban design, and city planningWhile describing the changes that so drastically altered the form, function, and character of the city, Goldman, through detailed descriptions of special people and special places, gives a sense of intimacy and immediacy to these otherwise impersonal historical forces. City on the Edge unflinchingly documents and describes how Buffalo has been battered by the tides of history. But it also describes the unique characteristics that have encouraged an innovative cultural climate, including Buffalo’s dynamic survival instinct that continues to lead to a surprisingly and inspiringly high quality of community life. Finally, it offers a road map, which-if followed-could point the way to a new and exciting future for this long-troubled city.” 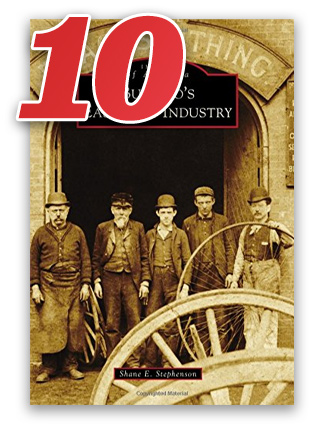 From Amazon.com: “By 1832, when Buffalo was incorporated as a city, the East Side represented a vast forested area and farmland cut with the beginnings of the major arterials of Genesee, Sycamore, Broadway, William, Clinton, and Seneca. These streets were laid out in 1826 and represented the seeds of the East Side’s explosive growth. Along these radial thoroughfares, the development of railroads and the Buffalo Belt Line, constructed in 1883, created a semicircle pattern that outlined the East Side. Industries began sprouting up, eager to use their proximity to the belt line to transport wares all over the country. Immigrants from Germany, Poland, and Ireland, along with African Americans from northern and southern states, began establishing their lives around these industries. Access to land, water, roads, and rail lines and eager immigrants and natives looking for work led to the development of Buffalo’s East Side industry, an immensely diverse industrial base and workforce.”

Check out our other blogs in this series for other great ideas on what you can do at home during this crazy time:

As always let us know what you think in the comments and if we’ve missed any great books about Buffalo Niagara that we can add to future lists.