Theater Review: All Is Calm, a MusicalFare production at Shea’s 710 Theatre

An homage to the human spirit, and a message of peace. 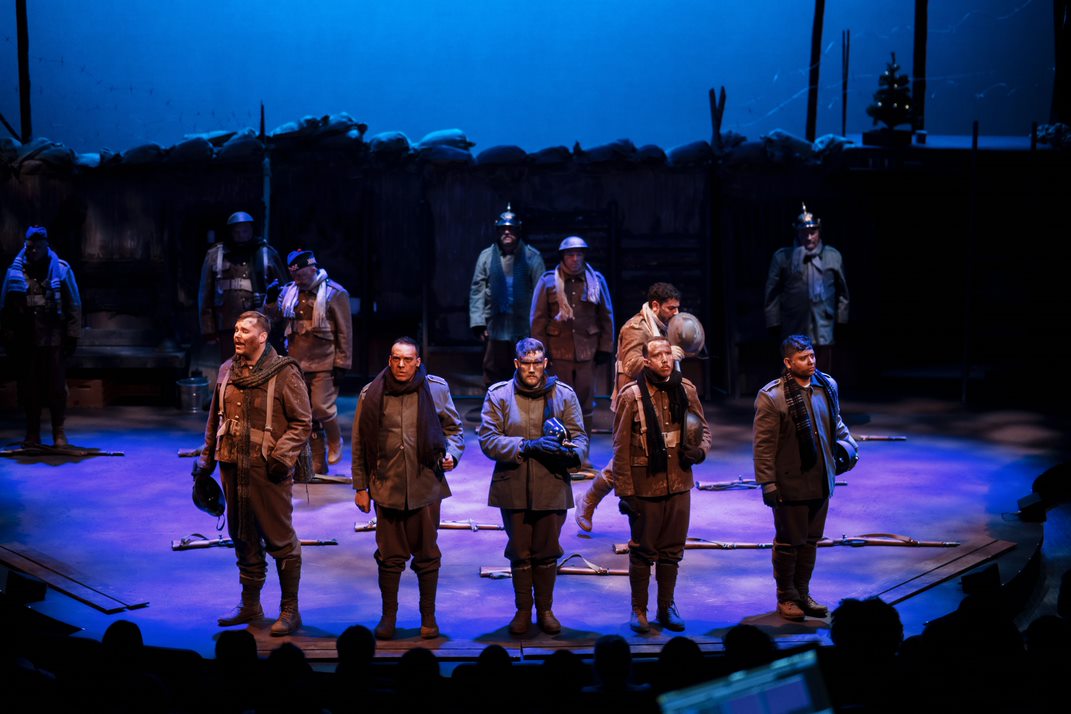 All is Calm is playing at Shea’s 710 Theatre from December 1st-18th, 2022. Photo cred Pat Cray @yungpainkiller.

All Is Calm is a stunning production on every level. This 80-minute gem, a dive into the hearts and minds of ordinary soldiers, is directed by Susan Drozd with a cast of 12 men. It is an homage to the human spirit, and a message that when left to their own devices, sans propaganda and demagogic fervor, people generally get along just fine.

It was 1914, the first Christmas of the War To End All Wars, aka World War I. Thousands of British and German troops on the Western Front left their trenches and for one night and day, became friends in what became known as the Christmas Truce. They bantered and sang, exchanged food, drink, gifts and addresses and buried their dead. They even played a game of football (soccer) in No Man’s Land, the area between the trenches that was surrounded by barbed wire.

All Is Calm is a reenactment of the spontaneous truce in the form of a radio play – music and text. Written by Peter Rothstein, with vocal arrangements by Erick Lichte and Timothy C. Takach, the dialogue is taken directly from the letters, journals, poetry, and essays of the soldiers involved as well as war documents and an old radio drama. 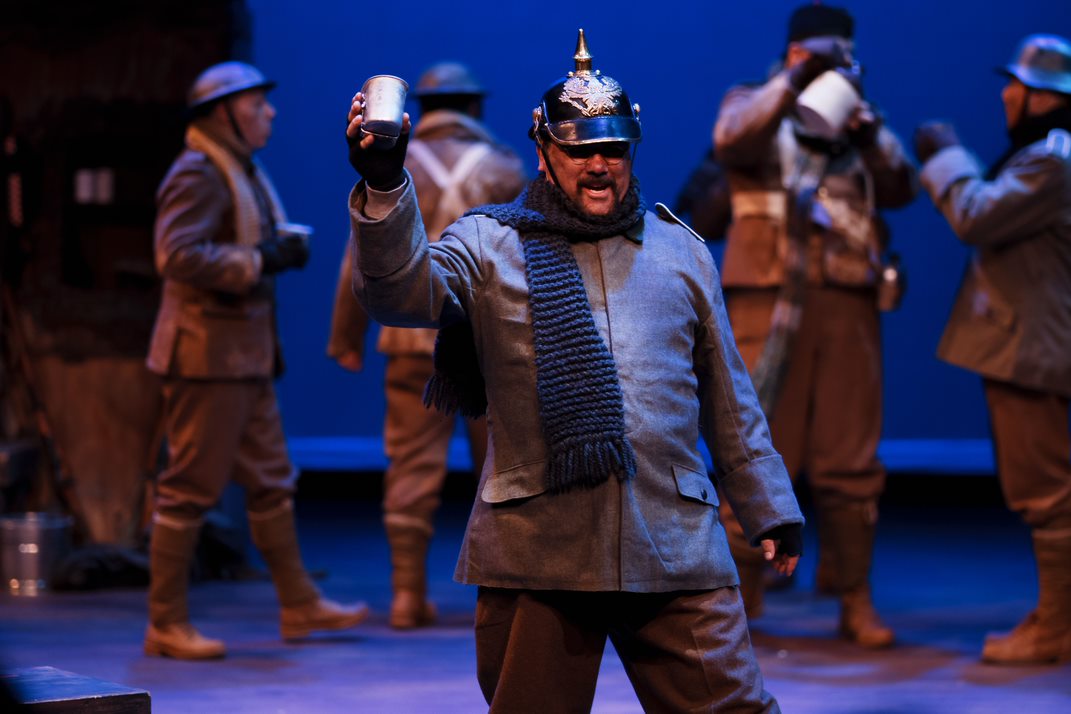 All is Calm speaks to the power of Christmas. Photo cred Pat Cray @yungpainkiller.

The songs include trench songs, which were often comical and bawdy, as well as popular songs of the day, both sentimental and patriotic, and Christmas songs from different countries. The songs and text together form a coherent and absorbing history of those remarkable two days.

The cast of 12 expertly portrays various soldiers as they quote what each has written. They are English, Irish, Scots, Welsh, French, Italian (the Pope has a few lines), and German. Their voices meld together in beautiful harmonies as they take the journey from civilian life to the war-torn, insect and rat infested trenches of the Western Front. There is no orchestra. All the songs are sung a capella, with Music Direction by Theresa Quinn.

What began as a lark for British men, who were sure the war would be over by Christmas so one had to get into it as quickly as possible so as not to miss all the fun, turned into an endless nightmare as the men lived and died in the muck and mire of the vast line of trenches. Then came the quiet two days of silenced ordnance, camaraderie and good cheer, only to become a memory as the men again took up arms against each other.

Cheers to the Season

All Is Calm was produced at MusicalFare last year to sold-out audiences. The expanded stage at 710 allows for an additional two cast members as well as a larger set. Designed by Dyan Burlingame, the entire set is mud-colored, including the floor, with corrugated metal and wire shoring up the trenches, giving the effect of a wearisome and filthy environment, mitigated by the deep blue night sky the men gaze upon as they stand with their rifles sitting on the parapet.

It all begins with a boom that reverberates throughout the theater, as if a cannon has just fired, courtesy of Lighting and Sound by Chris Cavanagh. Costumes are by Kari Drozd, hair, wigs, and makeup by Susan Drozd, Properties by Kevin Fahey, and all those dialects coached by Amanda Sharpe.

All Is Calm is an engrossing look into a slice of history that is thought-provoking, entertaining, and a wonderful night of theater. Perhaps it will become an annual event. It deserves it. Kudos to everyone involved.

All Is Calm, a MusicalFare production is playing at at Shea’s 710 Theatre from December 1st – 18th, 2022.
Get Tickets & More Information
Contact us for more information!