Theater Review: Guards at the Taj

What if two young army men were ordered to perform a horrific soul-crushing task that if not carried out would result in their deaths? 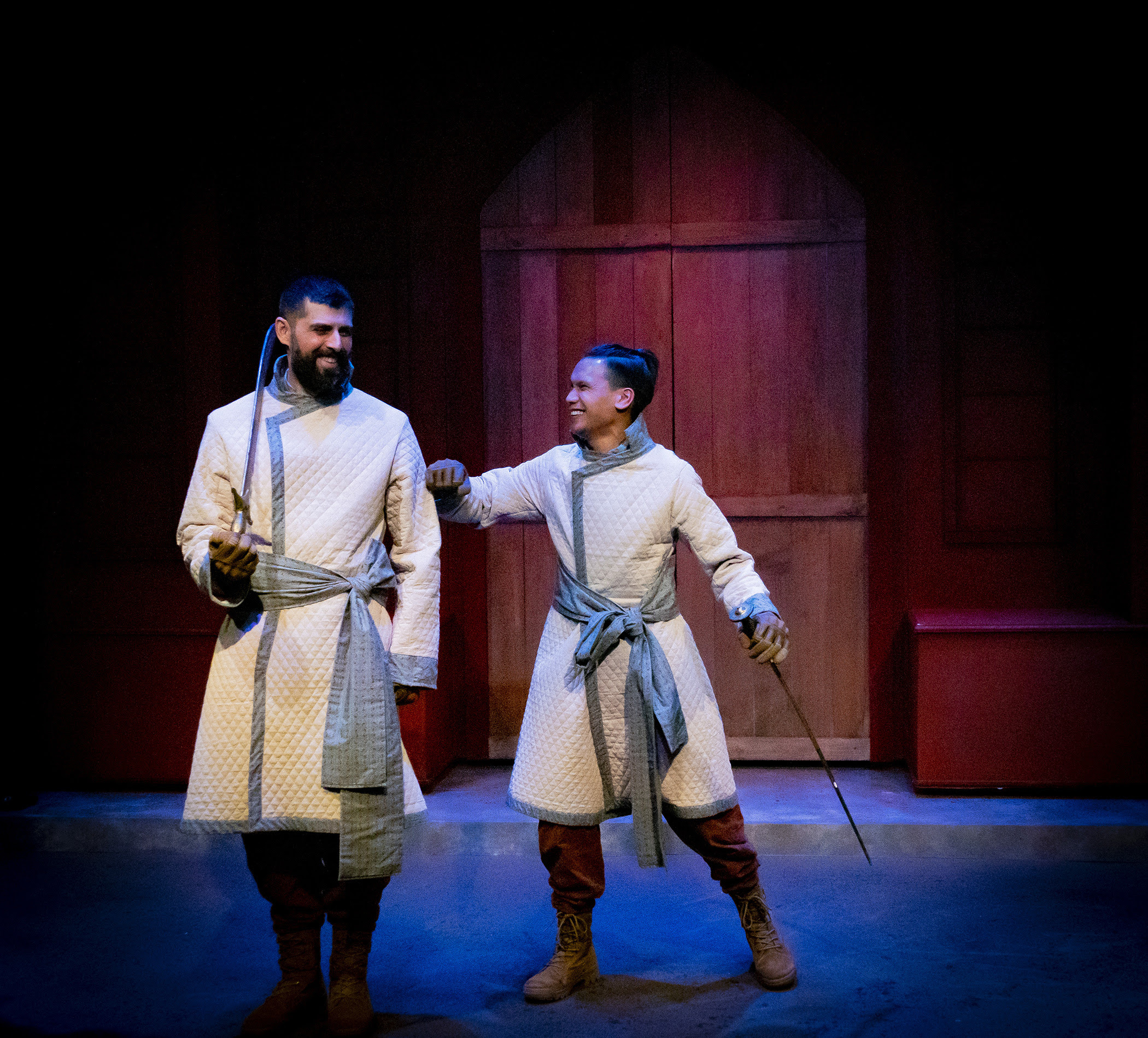 Guards at the Taj is playing until December 11, 2022. Photo credit Gina Gandolfo.

What if two young army men were ordered to perform a horrific soul-crushing task that if not carried out would result in their deaths? Throughout history, this philosophical conundrum has been faced by millions of military and civilians whose lives depend on the whims of demagogues, kings, and dictators. The powerful 80-minute drama, Guards at the Taj, the Obie Award-winning play by Rajiv Joseph, explores that conundrum, and its effects on two young soldiers.

Babur (Darryl Semira) and Humayun (Afrim Gjonbalaj) have been best friends since childhood. They are on the bottom rung of the military ladder, dawn guards at the newly constructed Taj Mahal in 1648, just before the walls were removed and the most beautiful building in the world could be seen in all its glory. It was ordered to be built by the Mughal Emperor Shah Jahan in memory of his wife, taking 20,000 laborers 22 years to complete. Babur and Humayun are forbidden even to turn around to look at it.

This does not pose a problem for Humayun, who operates strictly by the book. His father is the head of the guards, a strict disciplinarian who is on the lookout for any infraction by his son. His friend, the free-spirited, mischievous Babur, on the other hand, is always late to guard duty, wants to chat when they are forbidden to talk, and is full of fanciful ideas about flying machines that could soar into the heavens and reach the stars. 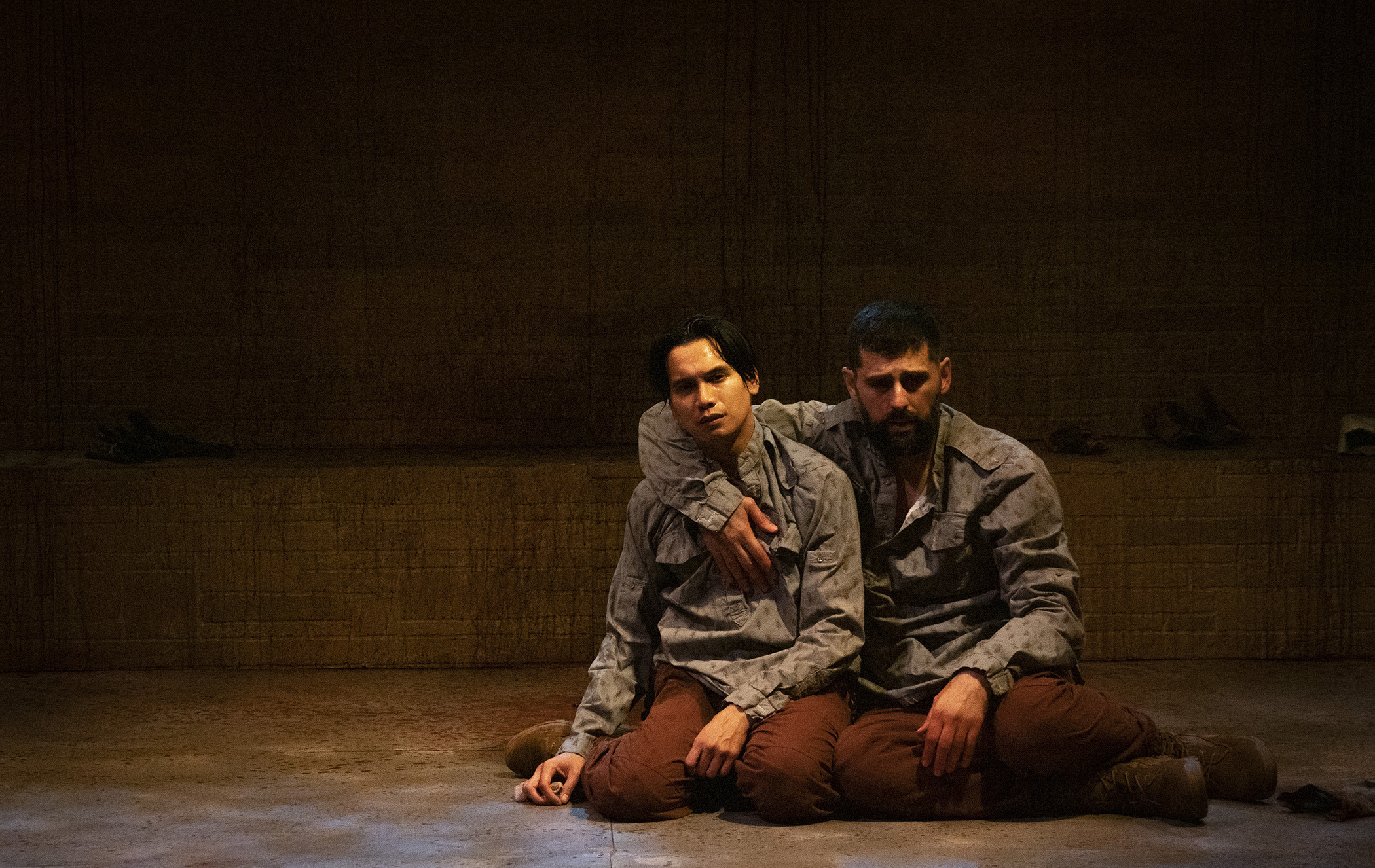 Both actors are absolutely superb in their roles, so we witness two fully realized people, not just characters representing a stereotype. Director Katie Mallinson has chosen well and brought out the very best in her actors.

Darryl Semira as Babur has an impish quality, like a sprite, that flashes in his eyes as he cajoles his buddy to join him in his flights of fancy. He is playful and inquisitive, nagging at his friend to lighten up, listen to the birds, take a peek behind them. Who is to know? One can just tell that he has been the one seeking adventures since they were little children, and feels stifled by the strictness of their military life. That was scene one. In scene two, task completed, it is clear his sweet spirit was not meant for a soldier’s life. He is twitchy and terrified, unable to be still, and sure that his actions have caused a great harm that will echo through the ages.

Afrim Gjonbalaj as Humayun stands tall and rigid on duty, uniform crisp, eyes straight ahead. He frets about breaking rules. He worries his father will be even more disappointed in him. He believes in duty, fealty to the Emperor, and following orders. As he tries to rein in his friend, it becomes clear how terrified he is. Cracks appear in his armor as he reluctantly listens to his friend’s fantasies, and for a time we get a glimpse of the boy he was. His agony later is palpable and heartbreaking.

The actors are so connected to each other, their lifelong friendship so believable, that what plays out between their characters seems even more appalling than if they were the stereotypical free spirit vs. true believer. It adds a deeper dimension to the play.

The set by Dyan Burlingame consists of a wall with a huge door in the middle and scaffolding on either side, that later works as a platform for the boys. The soldiers stand in front of the door, which opens in scene two to reveal a room. Lighting by John Rickus keeps the stage dim when the doors are closed and bright when opened. He also creates a flight of birds with lights that is very engaging. Katie Menke is responsible for the bird calls, among other less savory sounds.

Relevance for the Ages

​A great deal happens in this economical 80-minute, four-scene, drama. It is very funny and quite charming at times, until it is not. The seriousness of the content and the questions it raises about duty, responsibility, and the moral dilemmas faced by so many people speak to our world today, just as they did in 1648 across the globe.

Since none of the publicity for this show mentions what the task is, it will not be revealed here. Suffice it to say that whether it happened, as legend would have it, or did not, what it depicts is relevant today and unfortunately, will quite possibly be relevant 400 years from now.

Guards at the Taj presented by Road Less Traveled Productions is playing from November 10th through December 11, 2022.

Let us do the ground work. Get our weekly newsletters and partner updates delivered right to your inbox, twice a week. We have weekly giveaways and will keep you up-to-date on all the latest and greatest around Buffalo Niagara. Hope to see you there!
← Previous Post