Toni Stone is playing at the Ujima Theatre Company from November 4th-20th, 2022.

“Reach” as a Philosophy

Toni Stone was the first female professional baseball player, playing for the Indianapolis Clowns in the Negro Leagues in the early 1950s, and then one season with the Kansas City Monarchs.

In the play, Toni Stone, by Lydia R. Diamond, Toni narrates her story, bouncing around in time, from her tomboy youth in St. Paul, her years of barnstorming throughout the South and Midwest, to her time in the Negro Leagues, always in motion, moving back and forth and back again. She speaks directly to her audience, explaining her love of and obsession with that little round sphere that has fascinated players and fans alike for over a century and a half. She talks about “reach” as a philosophy, to always keep reaching, stretching almost beyond endurance to achieve her dreams. Surrounded by eight male teammates, who take on various roles, including women and white men, Toni takes the audience through the thrill and heartbreak that comes when one’s whole being is focused on a single dream. 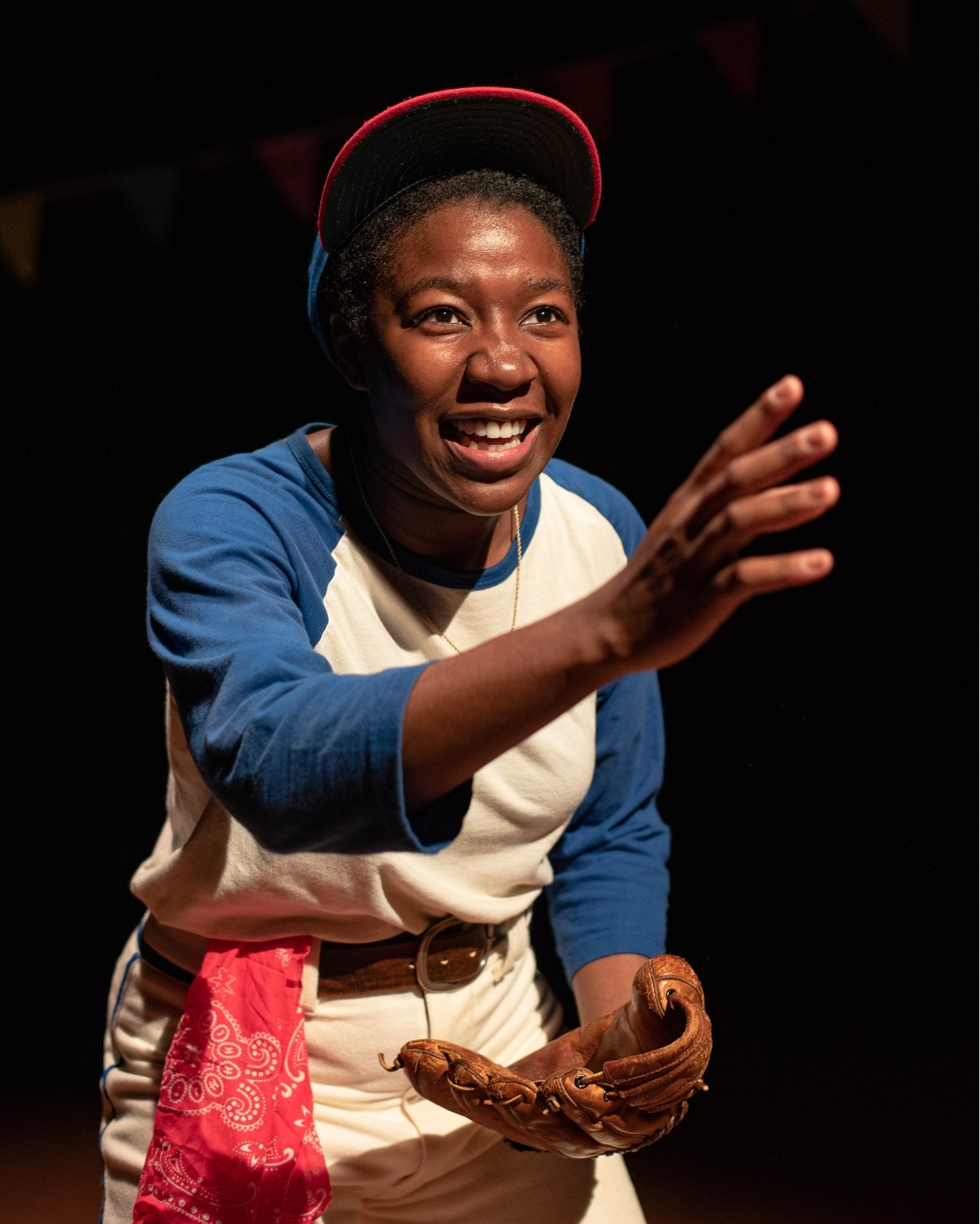 Gabriella McKinley is outstanding as Toni

For Love of the Game

Even with Diamond’s complex, witty, and at times startling and disturbing script, the play lives and dies with the actor who plays Toni, as she is the center of the play’s universe, with people and events revolving around her. Gabriella McKinley is outstanding as Toni. There is nothing subtle about her as she begins the play explaining her love of baseball to the audience with such passion that one cannot help but be drawn into her world. Toni is a concrete thinker, metaphors being lost on her, and McKinley’s expressions and comments when others attempt any kind of delicacy or understatement are priceless. It is a stellar performance by a skilled actor that is extremely energetic and in-your-face, yet also nuanced and sometimes sweet and innocent.

This is not to say that the supporting cast is lacking in holding up their end. Each of her teammates is a distinct personality who takes on other roles as needed.

Johnny Rowe is Alberga, the older man in love with Toni. His wooing of her and her confusion about his intentions are very charming. Brian Brown is Millie, the “whore with a heart of gold” who befriends Toni. His voice, physicality, and facial expressions are delightful, as he delivers hard-earned wisdom to his friend. Jake Hayes is the dim-witted Jimmy, who also has a short turn as Father O’Keefe that perfectly mimics the stereotype of the alcoholic Irish priest, a modern Barry Fitzgerald. Vincenzo McNeill embodies the superstar bitter player who was passed over by the Major Leagues because of his “attitude”, and who takes out his frustrations on his teammates, particularly Toni. His performance is chilling. (Between 1947 when Jackie Robinson took first base for the Brooklyn Dodgers and 1951 when Sam Jones played for the Cleveland Indians, only 20 black players were in MLB. The Boston Red Sox were the last holdouts, not hiring a black player until 1959). Gerald Ramsay is the team clown, King Tut, who entertains the crowd between innings. He has a monologue in Act One that is hysterically funny and extremely disturbing at the same time, and he delivers it deadpan with the full knowledge that his performance is meant to keep the white folks happy in their belief that they are superior to these clownish Negroes. Raynardo Shedrick is the bookish Spec, who reads passages from W.E.B. DuBois to his teammates. Julius Land plays the team coach, Stretch, and the cynical white owner, Syd. Jerai Khadim is Elzie, the team pitcher and closet homosexual, who calls Toni on her secret.

Direction is by Phillip Knoerzer and Curtis Lovell, who have created a choreographed piece that gives the feel of the Negro Leagues baseball world – traveling on old busses, sitting in the dugout watching teammates at bat, trying to find a place to stay in the Jim Crow South – along with the grace of the sport without actually playing it. The pace is tight, as is the dialogue, with excellent timing by the actors. Set Design by Dylan Regan and Brian Brown is simple, yet very effective with a baseball diamond center, a simple bar stage left, and a tiny bedroom stage right. Lights and Sound are by Nicholas Quinn. Listen for the crack of the baseball when it hits the bat.

A Metaphor for Life

The overt and covert racism of the time are on display in Toni Stone, as are the limits of individualism as a societal construct. These issues are brought front and center in sometimes humorous, sometimes frightening ways.

The play does not delve into Toni’s life after baseball. For that you can read the book the play was based on, Curveball: The Remarkable Story of Toni Stone by Martha Ackmann, or you know, google Toni Stone.

Baseball has often been used as a metaphor for life, its language having seeped into the vernacular describing different experiences and emotions. Hitting a home run. Getting to second base. Swinging for the fences. For some people, it was more than a metaphor, it was life itself. That was true for Toni Stone. The play evokes that deep need in a powerful, moving, and sometimes alarming way.

Toni Stone is playing at the Ujima Theatre Company from November 4th – 20th, 2022.