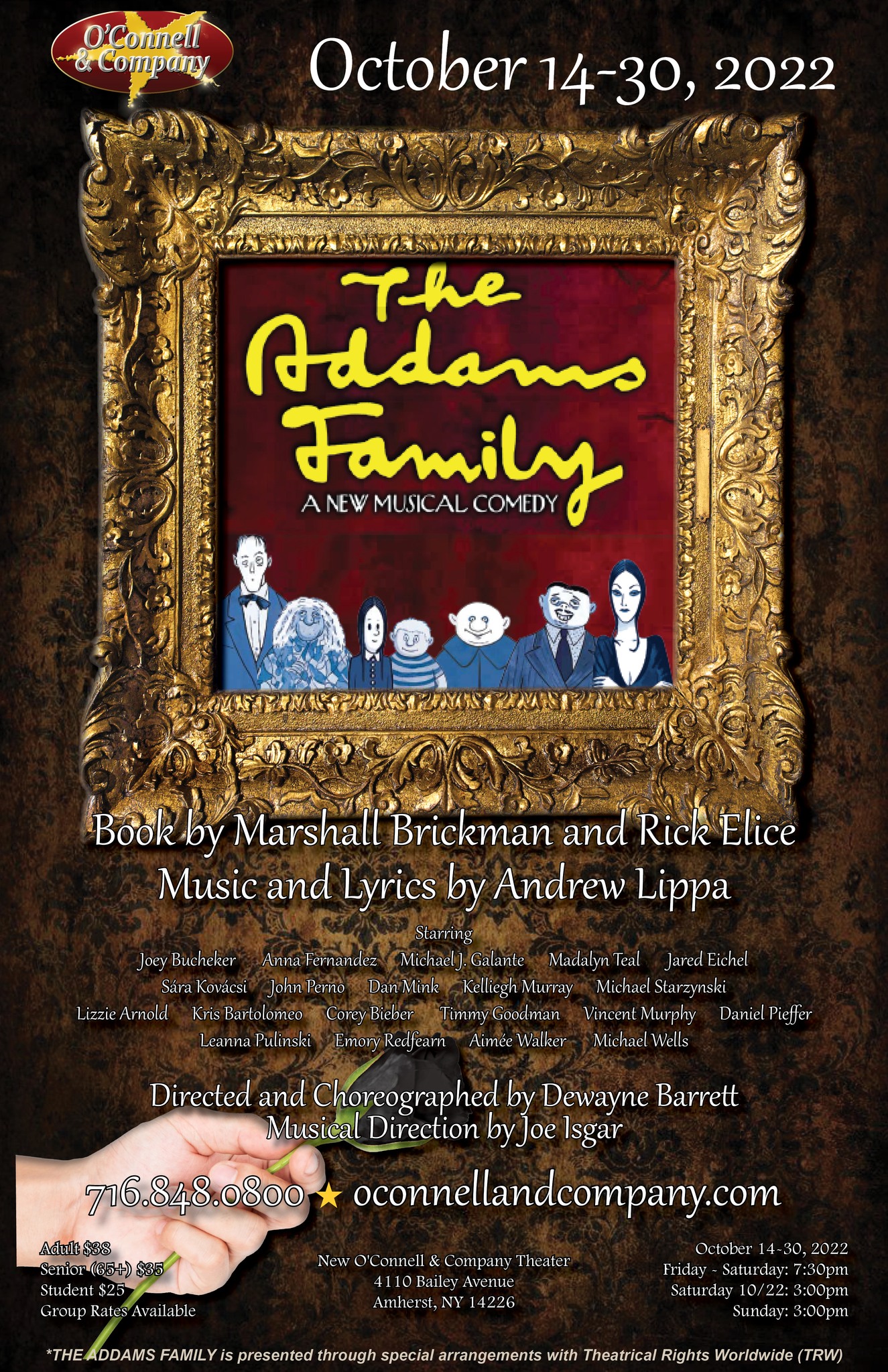 It’s Time to Pay a Call

Gomez, Morticia and their brood are temporarily in residence at O’Connell and Company in their new digs in Amherst in a musical comedy that sends chills down the spine and warmth to the heart.

The much-loved characters are on full display in this spooky tale of forbidden love…well maybe not really forbidden, just very surprising. It seems the Addams daughter, Wednesday, whose idea of a good time is torturing her brother Pugsley and shooting birds in Central Park with her crossbow has fallen in love with a very happy and cheerful young man, Lucas Bieneke. They plan to marry, but Wednesday fears her mother’s disapproval. She confides in Gomez, asking him to keep her secret until after the dinner planned for Lucas and his parents. Gomez has never kept a secret from Morticia…well maybe only a few. She demands complete openness or their marriage will be over. Meanwhile, the Ancestors have come out of their graves and are forbidden to return to the underworld by Uncle Fester until this matter of love is resolved. Meanwhile, Pugsley is upset because Wednesday won’t be available to torture him anymore if she marries and moves away. Meanwhile, Uncle Fester has fallen in love with…well, you get the idea. Kind of like Soap, but with ghosts and unusual costumes. 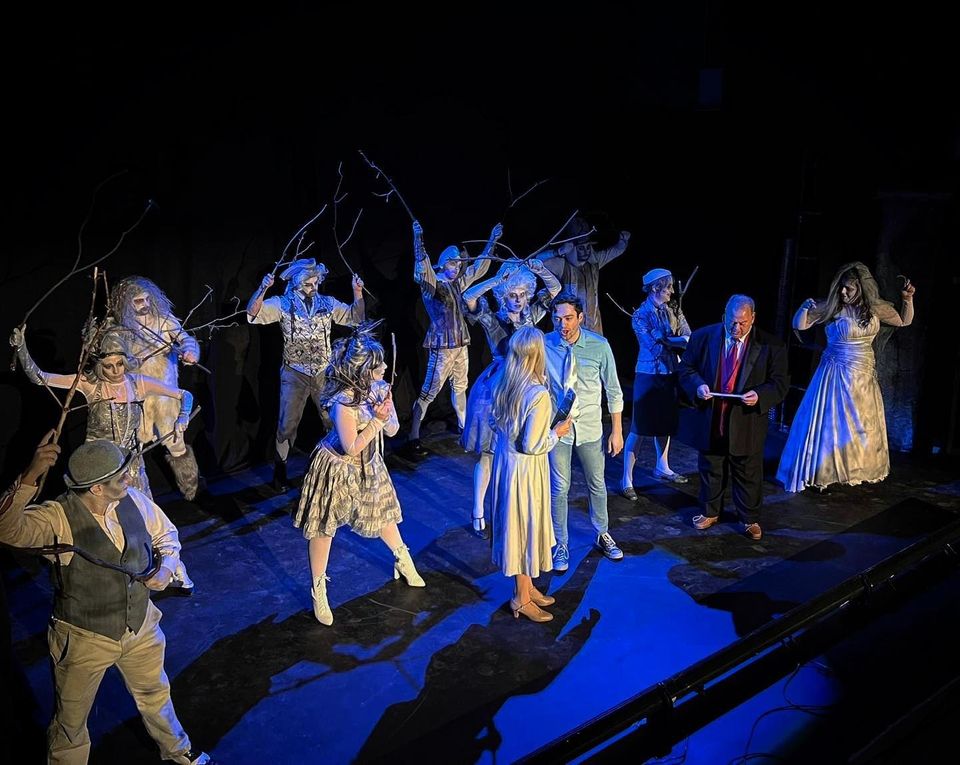 A Band of Characters on Display

The cast is very much in tune with their characters, most of whom are so well known it would be difficult to accept any major changes. The addition of the Ancestors adds a welcome new flavor to the proceedings.

Speaking of whom, Timmy Goodman has done an excellent job of dressing the Ancestors as everything from medieval peasants to Marie Antoinette and a Flapper. The costumes are outstanding. As is the makeup designed by Kris Bartolomeo, who also plays the above-mentioned guillotined queen. Her head really does seem like it could fall off at any second as it bobbles around.

The Ancestors are a highlight of the show with their dead-person makeup, period costumes and stilted movement, as though having just emerged from their final resting places, they are unsure how to move about in the world. At the same time, their song and dance routines with other cast members allow those talents full expression. In addition to Kris Bartolomeo, they are Lizzie Arnold, Corey Bieber, Timmy Goodman (Costumes), Vincent Murphy, Daniel Pieffer, Leanna Pulinski, Emory Redfearn, Aimee Walker, and Michael Wells.

Joey Bucheker and Anna Fernandez make a fine couple as Gomez and Morticia. Her deadpan delivery, not to mention her statuesque figure, long legs and perfect bosom, and his passionate, intense, over-the-top expressions of love and lust, and not-so-statuesque figure capture the essence of the characters. Their duet, Live Before We Die, and their tango with the Ancestors speak to their love for each other in a charming, amusing manner.

Madalyn Teal is a terrific Wednesday. She has a great voice and a great deadpan delivery. Michael J. Galante is right up there with her in the terrific department. His Uncle Fester is sweet, a bit of an imp and he rocks some powerful lungs. Sara Kovacsi also has that impish quality as Grandma. John Perno is sweet in a strange kind of way as Pugsley. Dan Mink does a fine job as Lurch. He has few lines, but quite a bit of presence. Jared Eichel is Lucas, whose love for Wednesday overcomes his reluctance to be impulsive. Michael Starzynski plays his father, who is a dour, controlling man who must make some changes. And Kelleigh Murray as Alice Bieneke is a revelation as she transforms from a meek housewife to a…well, I won’t give that away. Suffice to know that she nails it.

Perfect for the Season

The Choreography by Director Dewayne Barrett is delightful. The Tango de Amor number makes one want to join in, if only one knew how to tango. As Director, he could tighten things up a bit. The exchanges could have been faster during some of the dialogue, and the scene changes were a bit clunky at times.

The company has experienced some hiccups in this, their first show at their new theater. The original stage had to be torn down, so the actors were playing from the floor. I imagine some quick adjustments had to be made, which could very well account for some of the less-than-stellar scene changes.  Also, risers for audience seating have not yet been built, so there are some issues with the visuals for those in the back. Get there early but do get there.

That aside, this is a very entertaining and well-produced musical comedy with a message. “Love is the most important thing”, for the dark-loving Addams Family, as well as those of us who prefer to live more in the light, whether we get to or not.