GUTTER POP COMICS is hosting the Wakanda raffle to commemorate the final issue of Ta-Nehisi Coates’s landmark run on Marvel Comics’ Black Panther comic series. All proceeds will be donated to THE WAKANDA ALLIANCE, a local Buffalo non-profit organization. 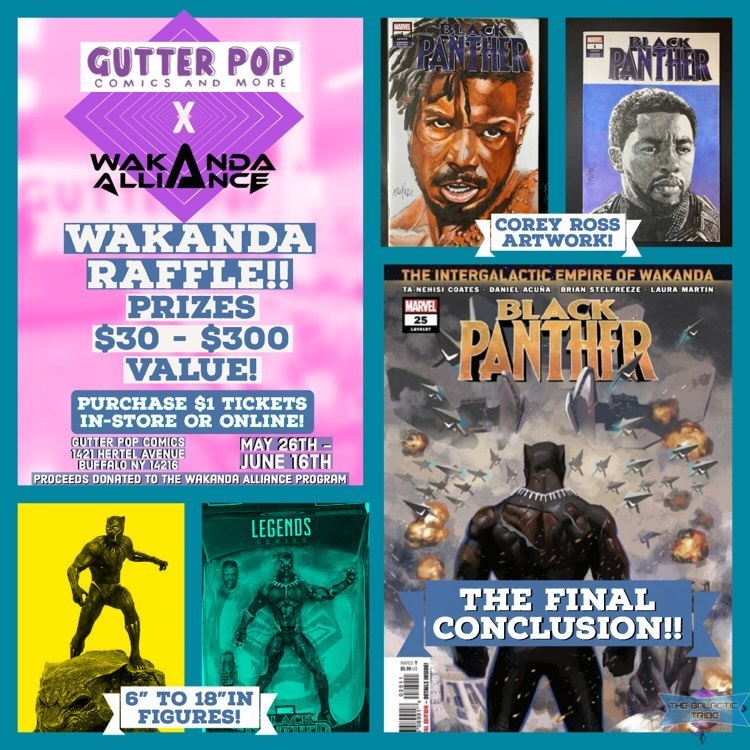 Do You Want to Enter the Wakanda Raffle?

GUTTER POP COMICS is hosting a raffle to commemorate the final issue of Ta-Nehisi Coates’s landmark run on Marvel Comics’ Black Panther comic series. All proceeds will be donated to THE WAKANDA ALLIANCE, a local Buffalo non-profit organization. THE WAKANDA ALLIANCE uses the BLACK PANTHER comics as part of their comic reading and comprehension workshop, and to provide young people a fuller context of the Marvel Comics Universe. Young people are encouraged to explore the inherent Afrofuturism of the fictional country of WAKANDA and its vision of an un-colonialized Africa, with its vivid imagining of a better world for Black people and what that could look, feel, and taste like.

The final issue of Ta-Nehisi Coates’s run is Black Panther #25 and was released on May 26th. The raffle will run until June 16th and the winners will be announced and contacted that day. Prizes will be available for pick up at Gutter Pop Comics or shipped free of charge.

Did Somebody Say Prizes?

Tickets can be purchased for $1 in any quantity in store and online at the following link: https://www.gutterpopcomics.com/imported-from-shopkeep-1/wakanda-alliance-raffle-ticket/

Learn more about the Wakanda Alliance:

The view from @buffaloharborcruises is pretty ...